The Norwegian Forest cat is the national cat of Norway. It is a healthy and robust cat, that doesn't need a lot of work with its fur. The temper is lovable; playful, social and family friendly.

The Norwegian Forest cat is a semi-longhaired breed. It's supposed to be big and powerful built, long in body and high on legs, big paws and a long, bushy tail. They have a duoble fur, with a wooly undercoat to keep the cat warm, and glossy, water resistant overcoat. In full condition the Norwegian Forest cat should have a full frill, shirtfront and nickerbockers.

All colours are allowed, except pointed colours and lilac, chocolate, cinnamon and fawn. The Forest cat should have a triangular shaped head with a long and straight profile and strong chin. The ears should be big with tufts and hear out of its ears, and eyes are slightly oblique with a wild look to them.

From old folklores the Forest cat has been known since the 16th century, known as "the Huldre cat" or "the Troll cat". It was given magical qualitys and took part in a lot of myths. Example given is that people for a long time believed that the cat really was a mix between lynx and cat.

The truth is that the Norwegian Forest cat in a early point of its history started to live on the farms. It was a tough breed, adapted to live in extreme nature, and a great mice hunter was needed at any farm. Due to unpopularity, misconduct, and also breeding with other domesticated house cats, the breed was almost led to extinction many times.

The first time "the Troll cat" participated at a cat show was in 1938. However, it wasn't recognized internationally as a pure bred cat before 1977. This thanks to persistent lovers of the breed. Since then the Norwegian Forest cat has been more sought after both inside and outside of Norway, and today it is to be found on all continents, including Africa and Australia. 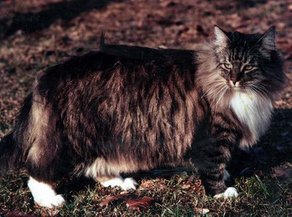 Breed standard was written with Pans Truls as a guideline